Alana’s Tale is out (available here and at Finding Avalon) and I got about halfway through writing Volume 3, The Tale of Roderik and Sophie, when I realized that rewriting from memory is just not as much fun as the thrill of creation. So I’ve been working on another book. Thirty-five years ago, when my … END_OF_DOCUMENT_TOKEN_TO_BE_REPLACED 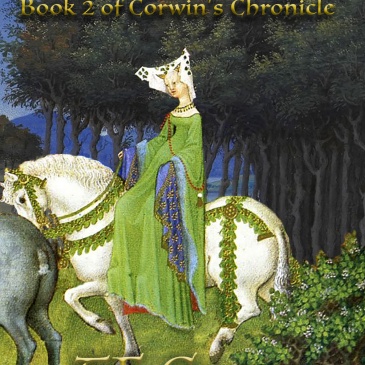 I’m so Excited! Volume 2 of Corwin’s Chronicle, Alana’s Tale, is now live on Amazon! Alana’s all grown up now, and engaged to Richard, the son of Lord Mallow. King Galaschin rules, and peace and prosperity abound. But not for long. Her uncle, Prince Rolf, sends a generous birthday gift to his brother, the king, … END_OF_DOCUMENT_TOKEN_TO_BE_REPLACED

So what happens after Murdoch and Joy live happily ever after? Well, for the first few years, nothing bad, so I skipped that part. However, after 15 years of King Galaschin’s competent rule, with his daughter about to be married, guess what skunk shows up at the picnic? Yup, it’s Rolf. A kinder Rolf, a … END_OF_DOCUMENT_TOKEN_TO_BE_REPLACED

You know there’s someone on your list you need a gift for. Why not Murdoch’s Tale? Now on Amazon in Paperback and Kindle format, specially priced to stuff stockings.

No post this week. Here’s why: And then this happened:

Upon the recommendation of various living and internet-based gurus, I’ve been playing with the cover design for Murdoch’s Tale. Tell me what you think! (I mean, how often do you get input into someone else’s novel?) Saying you like one the best with some other element from another option is just fine. Current cover: Option … END_OF_DOCUMENT_TOKEN_TO_BE_REPLACED

When writing the Faer, I relied upon both traditional Celtic Faery Lore and Native Peoples. Here’s a a link to a good explanation of the traditional view of reality and the social structures based upon it, which I embroidered into the concept, “Vaira.” http://www.firstpeoples.org/how-our-societies-work.htm

I have found it! I, Tovan of the faer, watched from the shelter of the forest. At the foot of the hill, beyond the cluster of huts where they lived, the quetan bent to their harvest, shining blades swinging in the bright sunlight. One corner of the field they would not cut, they could not. … END_OF_DOCUMENT_TOKEN_TO_BE_REPLACED

This is not an “out take,” strictly speaking, as it doesn’t appear in the book. It’s one of Corwin’s other Mouse King tales. The Mouse King and Sir Pettyfoote went out to quest one fine summer’s day. They followed a stream and found a river. They followed the river and found a lake. And … END_OF_DOCUMENT_TOKEN_TO_BE_REPLACED